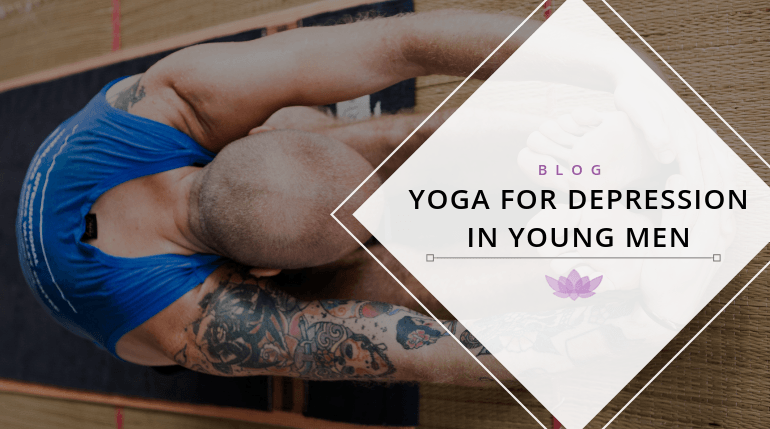 Yoga for Depression in Young Men

How can yoga support young men with depression and help prevent suicides?

‘The body today is nothing but the accumulation of our past, thoughts emotions and actions’ – Gregor Maehle

Imagine there was a disease that had been killing men around the developed world without warning, and it was now the single biggest killer of men between the age of 20 to 49. This disease has been known about for a long time but has been spreading at an alarming rate in the last 10 years, and is now at the highest it’s been since the 1980’s.

Suicide is, in fact, today the single biggest killer of young men in the UK, if you are a male under the age of 50 you are more likely to die by suicide than by road accident, cancer or heart disease. Yet somehow the money spent on research and received by charitable donations for this male suicide epidemic is significantly lower than for any of these other leading causes of death.

The statistics are shocking and this issue is very often news to most people.

“Suicide is a hidden killer of healthy young men with their whole lives ahead of them.”

So what’s causing so many Young men to take their own lives? It’s likely that many of these suicides are the result of depression. One calculation by experts predicts that if depression was eradicated from the world overnight the number of total suicides would be reduced by 80%. Depression is the mental health issue most closely linked with suicide.

We’ve all felt sad at times, and feeling down from time to time is natural. Depression, however, is a mental health condition that is more than just feeling sad on occasion. It is also different from the feeling of grief, which is a healthy reaction to the loss of a loved one or something close and important to us. Depression is prolonged and relentless, and importantly it is a life-threatening condition that can incapacitate a person and leave them suicidal.

It’s a combination of experiences and distortions in the way you think and feel. It’s a feeling of helplessness and rejection, of being a failure or not good enough. It’s feeling like nobody wants you or likes you, and if someone does like you, soon enough they will find out what you’re really like and stop liking you. Again, many of us will feel like this at some point but importantly with depression, it just comes all the time, it’s relentless.

Currently, the most common way to treat depression is with medication, in particular antidepressants, which simulate the production of serotonin (the happy hormone) in the brain. These can be a useful short-term fix but often when a patient stops taking the medication symptoms will return, creating a dependency on the medication itself. These medications can also become addictive and once a person is on them it can be hard to stop.

Is depression really a bigger problem for men?

In the UK cases of medically diagnosed depression are actually 20-40% higher in Women than they are in Men. So does this mean the issue of depression in less important in men? According to the UK Office for National Statistics of the 5981 deaths by suicide in the UK in 2012, 4590 were men, that’s more than three quarters. And 75% of deaths by suicide are by people who have never been diagnosed with a mental health issue. As mentioned previously, in the psychology of suicide, depression is the most closely linked mental health issue, and in fact, some Psychologists believe that it’s almost only in depressive episodes that suicides occur. These three factors lead to a startling conclusion about male mental health, in the UK at least, depression in males is actually the most prevalent, but men with depression simply won’t talk about their suffering and will often take their lives before they do so.

What’s causing depression in so many young men?

Around the world depression in men is still a taboo subject. It’s seen in lot’s of social groups as a sign of weakness in a man, and from an early age, a young boy is often taught to avoid showing weakness. ‘Men should be simple, and that’s the way it’s always been’. It’s easier to hide behind pints of beer, sports or computer games than to talk openly about their feelings. Some of these rules are set in place very early in a boy’s life.

All over the world, there is an idea of masculinity that revolves around being the strong provider. Men place more importance on their work than women and place their work at the top of their masculine identity. Men also think that financial stability and success is the most important thing a woman looks for in a partner (40% believe this is the number one factor looked for by a woman), whereas the opposite is actually true (only 4% of women rank it as their number one).

Society is moving on from the male-dominated world of the past and with this shift comes a change in the labour market and a move, particularly in the developed world, to more ‘feminine’ service based roles, and away from labour heavy ‘masculine’ roles. This move away from a male-dominated world. It could be that this change is happening faster than the change in masculine identity, and we are currently in a state of flux before a new more progressive male identity rises from the ashes.

How can Yoga Help?

Practising asana has deep physical effects on the brain that don’t require any effort other than movement. According to Tim McCall’s book Yoga as Medicine, studies have shown that prolonged practices (3-6 months) of Hatha Yoga can reduce cortisol (the stress hormone) levels and increase serotonin (the happy hormone) in the brain. And when practised along with meditation and pranayama 60% of patients showed improvement in sleep patterns, digestive symptoms, their mood and social interactions.

In his book Ashtanga Yoga – Practice and Philosophy, Gregor Maehle says that ‘the body today is nothing but the accumulation of our past, thoughts emotions and actions’. By practising asana we open up different areas of the body physically, essentially bypassing the neocortex, which is the thinking, conscious part of the brain, and targeting the instinctual, sub-conscious parts of the brain that are tied up directly with the body. It’s long been known in Yoga that emotional releases can come from opening certain parts of the body. Lot’s of Yogis have experienced significant emotional release from deep back-bending or hip-opening classes. And simply letting go of physical tension can alleviate the feeling of tension built up by stress and depression.

There is also a direct connection with posture and mood. Improved posture from a prolonged practice of Yoga helps to promote deeper natural breathing, which increases oxygenation of the blood and can lift energy levels.

It’s not just the physical aspect of Yoga that can help treat depression. Pranayama practices, in particular Nadi Shodana and Bramrhi, are powerful in the prevention of depression. Nadi Shodana balances the left and the right side of the brain and also balances the chemical levels in the brain, in particularly cortisol and serotonin. Bramrhi, used before bed can encourage better sleep and reduce the risk of falling into the sleep-depression cycle.

Meditation promotes mindfulness and observation of the body and the mind. By becoming more aware of the body and the breath and by learning to watch thoughts occurring and their patterns this creates awareness of the beginnings of a depressive episode. By recognising episodes before they start and by having the tools, like asana and pranayama, to turn to when the early onset symptoms of depression occur, the episode can be stopped before it starts.

It’s not hard to see that by introducing Yoga to young men at an early age, perhaps during their most challenging teenage years, we can give them a crutch and a tool for dealing with difficult times as they navigate through a world that is changing so quickly for them.

If we can just give people these options they can choose to use them to manage stress anxiety that inevitably comes from a living in a rapidly changing and overstimulating world. Simply practising yoga asana can have profound benefits on a young man’s, or anybody’s, mental health, and in doing so can prevent someone with so much to give from taking their own life. 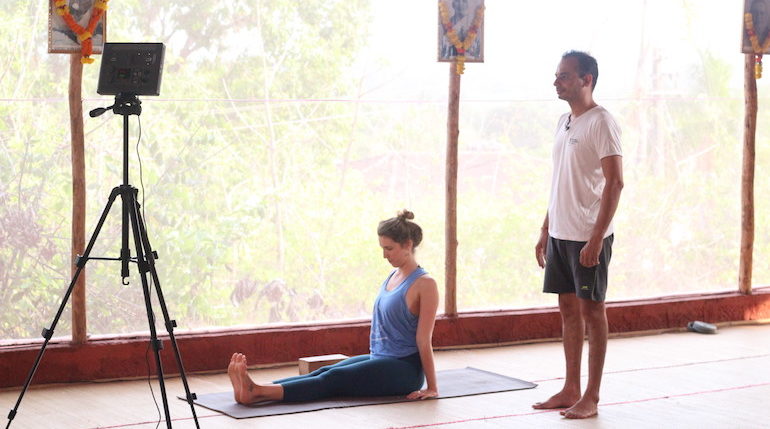 As part of our commitment to providing continuing support and education to our graduates, Lalit has put together a new series of Asana Breakdown Videos designed to give you an overview of some key asana.

In these videos, Lalit will give you an overview of each full pose, and then a number of modifications to help you or your student safely build their practice with the support of techniques and props.

In the below example Lalit takes us step by step through the stages of building a safe and strong sirsasana (headstand).

Over the coming months, we will be continuing our commitment to producing new educational and support material as it’s important to us that our students always continue to progress their teaching and their practice after they graduate.

If you have any suggestions as to what you would like to see next from Lalit you can post or contact us on any of our social media channels.