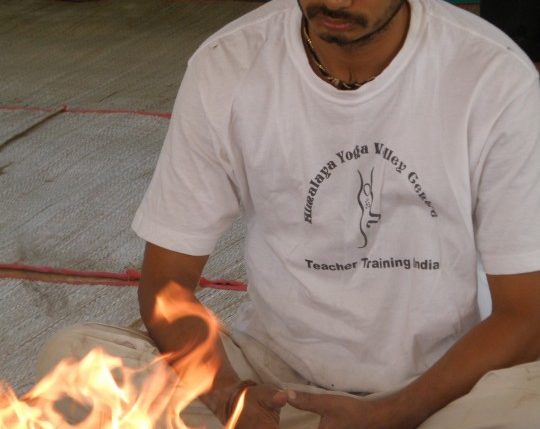 Say you practice Ashtanga yoga in India and most people will bow their heads and perhaps even touch your feet in hope of some transference of your wisdom and great spiritual aptitude into their being. After all, in India if you are practicing Ashtanga yoga you are practicing the 8 Limbs of yoga- a blueprint set out thousands of years ago by a great Indian scholar & sage Patanjali, to overcome life’s challenges through spiritual disciplines as set out in 8 limbs. If you are practicing Ashtanga yoga you are on a life long journey, a spiritual quest to attain enlightenment and free yourself of the binds of the impressions of karma through the science and discipline of the 8 limbs of yoga. You most probably aren’t wearing hot pants, two layers of lip gloss and gyrating your hips to music to get your shakti pumping whilst you do gymnastics on your 100 dollar yoga mat…or maybe you are?

Who is to say the teacher with the lip gloss and the 100 dollar yoga mat isn’t paving her own path to enlightenment through practices such as meditation, beliefs such as Ahimsa manifested as vegan-ism, burning of tamasic qualities through developing tapas in her dynamic asana practice? Go get em sister! To assume she wasn’t practicing the 8 limbs would be an ignorant and small minded assumption. The question is- where do we draw the line between tradition and open to interpretation?

I was in a cafe in Goa talking to two friends from India about “styles” of yoga outside of India. I was met with some good-natured giggles and the occasional hoot from these two men when I described some practices taking place with the word yoga attached to them It went like this;

Me: “Well there is hot yoga where you go into a REALLY hot room and practice yoga and push PAST the point of flexibility and everyone is covered in sweat”. Them: “Aren’t they worried about increasing pitta and becoming crazy like that Indian guy who founded it with the shorts and the ponytail? You know, the one who stands on people’s backs during class!”

Me: “Maybe… but they could always do aqua yoga afterwards to cool down”.

Them: “Yes lots of Indians take a dip in the holy Ganga to worship”.

Me: “Well it’s a chlorinated pool usually at a leisure centre… and then there is Doggy Yoga…where you bring your dog and the dog is doing yoga with you and-”

Them: They actually cannot breath they are laughing so hard.

This is fun! I keep going.

Me: OK…Nude yoga! Where everyone practices naked!

Them: Silence. They were not laughing… and they looked a little hurt.

Where do we draw the line between innovating and hurting?

India and her people do generous well. It is one of the many reasons I live there. Generosity is weaved through daily life both physically and spiritually. On every long train journey you will be offered food or a smile. At every chance someone will be generous with their thoughts and strike up a conversation. When you don’t have the right change in a big city they will tell you to come pay tomorrow.

I have often passed  Hindu temples and been called inside, offered sweets and asked to take blessings from the prayers being said. On numerous pilgrimages North I have been welcomed at the Golden Temple in Amrtisar by devout Sikhs and have sat in their holy rooms with their holy books and prayed alongside me as I quietly said Hail Marys and knew that our prayers would meet somewhere in the middle, on the way up. I have been welcomed into mosques, churches, temples and family prayer rooms. Nobody ever knew what religion I was. Nobody cared. They were generous with their spirituality, they wanted me to benefit from their spirituality, they genuinely believed that their Gods would bless me. They never tried to convert me or asked for a donation, they never asked me what religion I was. They simply shared their spirituality with me. In India I see where religion is transcended and spirituality and connection to God takes over. India is happy to share spirituality. People are overjoyed to learn that yoga has been so embraced outside of India.

Yoga is not a religion. Yoga is however a spiritual practice. Yoga comes from India. India is sharing yoga with the world and no one there has asked for anything in return. Peoples spirituality is sacred to them. Yoga is sacred to the people who have so kindly shared it with us. Where do we draw the line between reverence & restriction?

The ethnocentric act of taking yoga and thinking we can somehow “shake up” that 5000 year old science from India is a poor reflection on the borrower. Although we were never given a set of rules when we borrowed yoga (less than a century ago) the same common basic manners should no doubt apply as when you borrow anything from anyone.  If we borrow someones car  we don’t drive around town to our friends houses to show it off and claim it is ours. We don’t stick a trademark tag on that car and tell other people they can’t drive their cars anymore without our permission because they way we drive our car is so special. We don’t repaint it, add fluffy dice, customize the plates with our names on it and then drop it back to the lender unrecognizable. If yoga is a science then so is baking cakes and in both cases taking essential elements out like the Yamas and Niyamas or self raising flour means that it usually ends up just not quite right. If yoga needed to be changed so much from when we got it in its original form why have we all ran with it so much?

And what about those customized number plates of the yoga world? Joe Bloggs Yoga…Jane Doe Yoga…really? You came up with that yoga you’re teaching and named it after you? Wow! Even the great guru Swami Sivananda did not call his teachings Sivananda Yoga- one of his disciples in honor of his guru named those wonderful teachings after Swami Sivananda. The founder of our school Yogacharya Lalit would never take ownership of yoga by placing his name in front of it. We have discussed this and his reasoning is that he is simply a teacher not the creator of yoga (also his wife is pretty bossy and not much of a fan of that kind of thing…) Some of the best yoga teachers in India will never tell you their names. They are not a superstars out to impress you. They are a conduit to pass on to you what their teachers passed on to them.

We had a wonderful trainer on our team a few years back from America. She always told our trainee teachers that you shouldn’t remember a great teacher. Sounded strange to me at first but then I thought back to my best yoga experiences. My best teachers always helped me to connect to myself. To join, to unite, to connect my mind and body. I didn’t want to go to a one woman yoga theater show. I wanted to connect with myself. I wanted my yoga to be about yoga not Jane Doe.  I had often left a superyogistars class thinking about what a great teacher they were, how many cool things they said, how great their lululemon underwear looked peeping out if their lululemon pants. How amazing it was that they warmed up by dropping into scorpion…but I never really connected to myself.

We are a traditional school however we are not a puritan school. Lalit wears jeans, has a laugh with his students and we even have dance offs in the shalla. In saying that we do have a process that help us with ensuring we are respecting traditions. Our guiding principle is “Honor the Source”.

Whatever choices we make as a school, as teachers as a collective is always placed under the light of that guiding principle. When we recently opened a new studio in Ireland we were asked every day when we would start Hot Yoga. Rent day was looming- sometimes in the first week tumbleweeds rolled through the shalla… People kept asking the question and the answer never changed. We wouldn’t. We would not offer hot yoga, or yoga with weights or hip hop yoga, or doggy yoga.

We would maintain our integrity and always honor the source. Our students found our lineage to be an asset to their practice and they kept coming back. Some people will not respond to our passion for lineage and tradition. Some people will never come back because the heater isn’t on high enough and we don’t play cool music during class. That’s OK. Not everyone digs everything. Our responsibility however as a school is to continue honoring the source regardless of how popular or unpopular it makes us.

Our message as a school is that Yoga is For Everybody and really it is- we learned that in India. It was shared with us in India. It is our duty to pass it on with great respect for the sacred science that is yoga. The response to us sharing traditional knowledge is irrelevant but it should not stop us from having integrity and respecting our lineage.

It’s pretty simple. We would not be here without our masters. It doesn’t take much for the ego to grow beyond remembering that. It only takes a few ooh’s and ahh’s from devoted students impressed with our practice, it takes a few cool videos on you tube for someone to forget, it doesn’t take much to start feeling like you have ownership over the shared science of yoga. So how can we evolve past this as students of yoga and teachers of yoga?

The traditional relationship of guru and student whereby the student credits the guru ensures we stay grounded. It helps us to be better teachers. It keeps us in the space of a student sharing our knowledge. It helps us grow, for when we know it all, when we arrive at another teachers class full to the brim of our own ideas and knowledge then we simply learn nothing. I can’t count the times a teacher has walked into one of our studios and the first thing they have said is “I’m actually a yoga teacher”. Most waitresses don’t slip that in when they order a meal- why do we need to? Aren’t we at that teachers class as a student? If not, why do we even need to be there?

My two Indian friends feeling hurt by nude yoga was not because they are prudish (read the  The Karma Sutra if you want to know about embracing the body and overcoming sexual hang ups….) They are both modern thinking, lighthearted and open minded people. They were hurt because their spiritual practice had been taken and cheapened, it had been reduced to an external and possibly sexual practice. I wonder if those same people practicing nude yoga would go to church service naked? What about heading to a synagogue naked? A mosque? Well why not? They simply want to embrace their bodies right? Why should someone elses spirituality stop them?

Yoga is for everybody, yoga has been gifted to us. And what a gift it is. Thank you India for sharing it with us. As teachers, students and practitioners we will try to leave it as we found it. Absolutely Perfect.