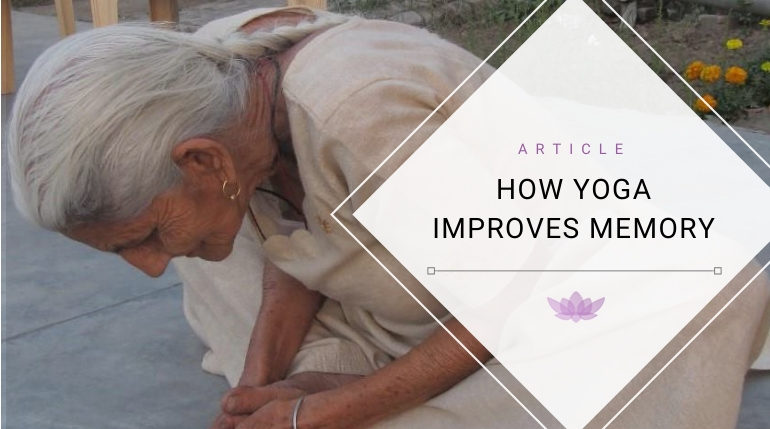 As life expectancy continues to increase, the quality of life sustained by an older population is receiving more attention. An important aspect of ageing is the decline in cognitive abilities, such as struggling with everyday tasks, memory loss, difficulty with words or numbers, or confusion in familiar environments. As these concerns become more apparent in society, the cost and lack of success noted with pharmacological interventions become even more concerning. In 2015, dementia and related diseases were already costing societies US$818 billion, and with the ageing population, this number is expected to increase to US$2 trillion by 2030. Yoga, however, could be an inexpensive way to look at dealing with the natural cognitive decline related to ageing.

The science of living longer has been a point of interest for centuries, and with ever-improving advances in health sciences and technology, life expectancy is continuously increasing worldwide. For example, the World Health Organization found that in 2020, people aged 60 years and older will outnumber children under 5 years. The UN expects the 80+ population to increase from 1.7% to 4.5% of the population by 2050. This increased longevity is leading to increased levels of chronic diseases and degenerative conditions. Worldwide, this puts a massive strain on the existing healthcare system.

We know that memory and certain levels of reasoning naturally decline with age. Mild Cognitive Impairment (MCI), however, is defined as an acquired cognitive deficit in the absence of functional impairment, or, the stage between the expected cognitive decline and a more serious advance to dementia. Unlike dementia, symptoms are less likely to affect daily routines, judgment, or reasoning. MCI symptoms present as:

MCI can result in reduced functional status, independence, and overall quality of life in older adults. This is demonstrated in the high levels of anxiety and depressive symptoms affecting adults with MCI.

In a systematic review of various pharmacological interventions for MCI, the Federal Drug Administration (FDA), which is responsible for the protection of public health, still has not approved effective medicinal treatments for the condition, despite many years of trials and billions of dollars invested into research. In the same review of various treatments and how they delay or prevent cognitive decline, the review found no statistically significant studies demonstrating dementia medications reduce the risk for dementia or improve the cognitive performance of older adults with MCI. This finding was consistent across the board when compared to other studies looking at the effectiveness of estrogen, antihypertensives, statins, and NSAIDs (aspirin, ibuprofen, and other anti-inflammatories) on adults with MCI.

Memory is a complex process continuously happening in multiple parts of the brain. The below Vox documentary explains memory and how it comes together, how unreliable it is, and how some of the world’s best memory athletes use what science knows about memory to do amazing things.

Short term memory, compared to long term memory, is generally accepted as being able to remember 5-9 items for anywhere between 15-30 seconds. For example, trying to memorize a phone number so you can dial it immediately. You are unlikely to remember this number in 5 minutes, let alone the next day. Long term memory, on the other hand, is understood to have a limitless capacity and can last for a few days or the rest of your life, depending on how often you review and retrieve the information.

Explicit memory is a subset of long-term memory and is defined as the memory of facts that one can consciously know and ‘declare’. For example, you can declare “My birthday is on January 3rd, 1992.” This includes things like names, dates, and experiences. This form of long-term memory is generated in the hippocampus, an area in the middle of the brain equivalent to a ‘save’ button, and is where the brain processes short-term memories into long-term memories, making them available for retrieval in the future. Given the ageing population, it is more important than ever before to understand that this cognitive decline can be halted or reduced.

A study conducted over 5 years looked at the impact of a customized yoga education program (YEP) on memory and cognitive functions of a nonclinical population of older adults. The YEP organized a once per week 40-minute yoga practice instructed by certified teachers. Attending 75% of the classes was required to remain a participant. Key features were “postures interspersed with relaxation, slow movements, and inner watchful awareness.” The program also asked participants to practice their weekly lessons by themselves at least once per week. The results of the program showed that the YEP was effective in enhancing memory and cognitive functions of the older adults who finished the study, with impact varying based on sociodemographic and program-related moderators (i.e. self-practice and lessons attended). Self-practice was the strongest predictor of improved memory for the YEP.

In 2016, 9 studies were reviewed to understand the impact of mind-body interventions on cognitive function and everyday functionality of 606 non-hospitalized adults aged 55 and over with MCI. The review compared the effect of Kundalini Yoga (KY) to memory enhancement training (MET) in older adults with MCI. KY was shown to improve verbal and visuospatial memory by using chanting components (Kirtan Kriya). Follow-up results showed increased neural connectivity within the parts of the brain associated with social working memory and verbal memory. Kirtan was also associated with enhanced neural activity and structural changes in parts of the brain associated with executive function.

The follow-up question to these studies seems to be, just how does yoga improve memory? Yoga tones the vagus nerve (the 10th cranial nerve) through the compressing and twisting of the body as performed in asana, and the focused breathing occurring along the centre of the body.

These processes stimulate blood flow and send signals to the brain that this portion of the body is being cared for and given attention in a safe environment. According to Polyvagal Theory, posited by Dr Stephen Porges, this process helps us to consciously mediate the response of our autonomic nervous system (ANS), which controls our glandular activity, heartbeat, and digestion. This includes the parasympathetic nervous system (PNS), which is responsible for the body’s rest and digest functions, and the sympathetic nervous system (SNS), which activates the flight or fight response when detecting danger.

All of these functions are crucial in allowing the brain to process, store, and access better quality information. How yoga tones the vagus nerve is an example of mind-body therapies, through which we can activate the PNS, generate the restoration necessary to prevent memory loss, and improve memory.

Below Eddie Stern, Author of How Yoga Changes the Brain and Can Transform Your Life, discusses in-depth the physiology of the effect of yoga on the vagus nerve and brain functioning.

Because self-practice is a key indicator in developing a positive relationship between yoga and memory, the asana sequence should be manageable for beginners in terms of the time and strength of the asanas. It would also be beneficial to explain and explore the third Niyama, Tapas, or self-discipline. This would encourage students to permanently adopt the new behaviour.

Components that should be included in a sequence include:

Props and modifications should be explained and suggested as the demographic is likely older and potentially less mobile. A sequence that allows students to remain in a chair could be necessary, as some may be bedridden. Ujjayi breath should be stressed, specifically during twisting or compressing postures to stimulate blood flow in the vagus nerve (I.e. Padangustasana (forward fold), Janu Sirsasana (head to knee pose), Marichyasana (One-Legged Seated Spinal Twist Pose).

As life expectancy increases, a larger portion of the population is suffering from a reduction in cognitive function. Memory is a complex process, through which details can be found, distorted, and even lost. While the pharmaceutical approach still hasn’t provided an effective solution to MCI and dementia, the significant outcomes observed in inexpensive mind-body therapies like yoga are promising in combatting MCI and improving quality of life. Through a combination of channelling the breath, chanting, meditation and toning the vagus nerve, we are better able to access the digestive state which supports brain health and encourages the memory encoding process.

Lynee graduated from her YTT in 2016 at the age of 19 before moving to Australia to complete her bachelor’s degree. Her appreciation for yoga came from seeing the benefits on her own mental and physical health, and sharing those benefits with friends and family is how she currently merges her training into daily life. A self-proclaimed tree hugger, traveller, and adventurer, Lynee has no definite plans for her future but intends to build a tiny house for when visiting family in America.

How to build resilience and dissolve stress

Yoga for corporate and office workers