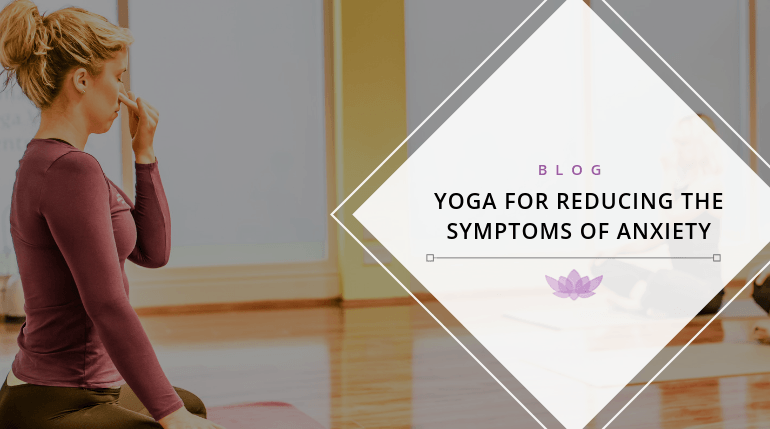 How Yoga can Reduce Symptoms of Anxiety

Anxiety is one of the most commonly cited reasons for joining Himalaya Yoga Valley Centre in Cork, and these are just the people who are seeking help for their disorder.

The Mayo Clinic says that experiencing occasional anxiety is a normal part of life. However, people with anxiety disorders frequently have intense, excessive and persistent worry and fear about everyday situations. Often, anxiety disorders involve repeated episodes of sudden feelings of intense anxiety and fear or terror that reach a peak within minutes (panic attacks).

Symptoms can vary, depending on the specific disorder, but there are some common symptoms including:

Where does Yoga fit in?

Yoga is a scientific system and discipline born in India thousands of years ago. In the west it’s often only recognised as a form of exercise but practised entirely it is a whole way of life and there are many practices including the asana (yoga postures) that can be of great benefit to people with anxiety.

In a 2007 study in the Journal of Alternative and Complementary Medicine, researchers at Boston University School of Medicine and McLean Hospital used magnetic resonance imaging to compare levels of the neurotransmitter gamma-aminobutyric acid (GABA) before and after two types of activities: an hour of yoga and an hour of reading a book. The yoga group showed a 27 percent increase in GABA levels, which evidence suggests may counteract anxiety and other psychiatric disorders. GABA levels of the reading group remained unchanged.

A study undertaken by the London – based Biomedical Trust found that of the 838 people tested, reporting with anxiety, 98% of them said their condition was helped by yoga. This is interesting to compare with the statistics on CBT (Cognitive Behavioural Therapy).

Anxious breathing tends to be contained in the upper chest and while the diaphragm is always moving during breath the accessory muscles of respiration might not be functioning very well, they can become rigid from tension, not allowing the person to create the space in the body for deep, full breathing. Practising 3-part breaths where the student, breathing through their nose, inhales into their abdomen, lower ribs and upper chest in sequence and exhales in reverse, can help to train them to breathe in a deeper, slower, more relaxed way.

Rolf Sovic of the Himalayan Institute has studied and worked extensively on yoga for anxiety and says that “the breath is the one automatic function of the body that you can readily take over with conscious effort. And controlling the breath turns out to be the entry point to calming down an overactive stress response system.” He goes on to say that breathing through the nose slows down the breath especially during the exhalation and this tends to promote the calmness of the mind and an activation of the parasympathetic nervous system.

Nadi shodana pranayama is an alternate nostril breathing exercise that balances the sympathetic and parasympathetic nervous systems. A count of 5 for each breath is recommended along with practicing without kumbaka (retention) until the student is very experienced.

Practicing bhramari (humming breath), where you hum on the exhale while blocking your ears encourages the student to lengthen the exhalation which has a calming effect on the nervous system. The humming vibration can be a welcome distraction from the rajastic (stimulated, anxious) aspect of the mind.

Sovic suggests beginning to practice meditation while lying down for 6 to 8 minutes and working up to 10 minutes or more while sitting on a mat or cushion. He says to keep it simple, observing the breath or adding a silent mantra like ‘So Ham’. He says to replace anxious thoughts with a blank mind is not the goal, it is to be able to rest in the breath or mantra focus and create distance from the anxious thoughts.

Chanting mantras channels the flow of energy through the mind-body circuit. Thus balancing the nervous system, regulating stress and tension in the body, and by balancing the endocrine system, chanting normalises hormone production, which balances our moods and overall sense of well-being. Chanting, both vocalising and listening, also stimulates the vegas nerve through muscle movement in the mouth and sensation in the outer ear.

In the book Ashtanga Yoga, written by Gregor Maehle, he explains that asana can release emotions stored in the body. Our past thoughts, emotions and actions accumulate in our bodies and asana is a method of releasing us from past conditioning. Restorative long help postures are recommended for treating symptoms of anxiety as they soothe the nervous system. It’s important to consider that for a student with anxiety who is new to the practice, they may start to feel more anxious if left for a long time in silence. A teacher should offer reassuring guidance and let the students know how long they will be holding a pose.

Leslie Kaminoff says in his book Yoga Anatomy, that gentle backbends and stretches that laterally flex the spine help to improve the function of the accessory muscles of respiration, thus helping students to take longer fuller breaths.

B.K.S. Iyengar offers some guidance on individual asanas that can help to relieve symptoms of anxiety. He recommends Adho Mukha Svanasana (Downward Dog) and Halasana (Plough Pose) as they have a soothing and balancing effect on the nervous system and can help to relieve breathlessness and palpitations. He also recommends Savasana but suggests that some students with anxiety can lie with a bolster under their upper torso and head.

Sequencing and Choosing a class

Mark Stephens, the author of Yoga Sequencing says that while more and more people are turning to yoga to combat stress he wonders are they getting a stress reducing yoga practice? While a student with a tamasic (dark energy) condition like depression can benefit from a vigorous, flowing style of asana practice, this kind of stimulation may exacerbate the symptoms of an anxious student. He recommends slower asana practice that includes long held forward folds, and a long Savasana, He also warns that alternating back and forth between forward bends, backbends and twists can be too stimulating.

A study by Jon Kabat-Zinn found that patients who had more mental symptoms of anxiety preferred a hatha yoga practice while patients with more physical symptoms preferred a mindfulness meditation. By asking the student a little bit about their symptoms the teacher will be able to guide them to the right type of practice.

Rolf Sovic says that a student with anxiety that isn’t chronic can practice a flow class as long as there is a sattvic (purity, consciousness) approach from both the teacher and the student.

Yoga nidra is a systematic method of inducing complete physical, mental and emotional relaxation. It is recommended for anxiety by Rolf Sovic in the book Yoga for Medicine and a study undertaken by Kamakhya Kumar in 2006 on college students found that yoga nidra reduced the stress and anxiety levels of both male and female participants.

During the practice, the student is lying down and is taken into a threshold state between sleep and wakefulness. The teacher is constantly guiding the students with instructions to follow but without deep concentration. The sequence first settles the student, then systematically relaxes each part of the body individually and together. The teacher then guides the student with instruction on to the breathing, maybe counting the breath, followed by visualisation. The student is very slowly guided back out of the practice to finish. The whole practice can be various lengths of time and Swami Satyananda Saraswati, founder of the International Yoga Fellowship, the Bihar School of Yoga and the Yoga Research Foundation says that an hour of yoga nidra is as restful as 4 hours of sleep.

Often we go to sleep exhausted and full of tension, have restless dreams all night and wake up feeling no better, as we never really relaxed. But the practice of yoga nidra according to Swami Satyanada Saraswati allows the student to be free of muscular, mental and emotional tension so deep relaxation takes place.

He also says that the mind is very receptive during yoga nidra as contact between the subconscious and unconscious dimensions are occurring spontaneously and one of the most effective ways of strengthening the mind is through the Sankalpa. The Sankalpa, meaning resolve or resolution is a short positive affirmation created by the student that gets repeated twice during the practice.

Ayurveda is a sister science of yoga. It is a holistic, healing system that was developed thousands of years ago in India. It is based on the belief that health and wellness depend on a delicate balance between the mind, body, and spirit. Every person is made of a combination of five basic elements found in the universe:

These elements combine in the human body to form three life forces or energies, called doshas. They control how your body works. The three doshas are:

Everyone inherits a unique mix of the three doshas. One dosha is usually more dominant. Each dosha controls a different body function. It is believed that your health is linked to the balance of your doshas.

With anxiety, there is an increase in vata dosha, so to reduce anxiety you need to reduce your vata energy. According to ayurvedic medicine, this can be achieved through the yogic practices mentioned already and by following a vata reducing diet and lifestyle. Dr Rohit Borkar of the Ayurclinic in Goa and lecturer on Himalaya Yoga Valley’s Teacher Training Course recommends reducing stimulation in the evening, for example instead of watching a thriller, listen to some relaxing music. Avoid stimulants like alcohol and narcotics. According to the 6 tastes recognised in Ayurveda Dr. Deepak Chopra says it is important to reduce salty, pungent, bitter and astringent foods, as an excess in these types can increase or irritate vata energy.

Anxiety in Ireland has reached epic proportions for both men, women and teenagers. We saw that women have higher rates of anxiety but men are less likely to ask for help so maybe the rates of anxiety in males are under-reported.

I have highlighted just some of the research that has proven the positive effects of yogic practices in reducing the symptoms of anxiety. We looked at pranayama, chanting mantras, meditation, asana, ayurveda and yoga nidra. All of these practices have been proven to reduce symptoms of anxiety by having a soothing effect on the nervous system. It is my hope and belief that yogic practices can be of great benefit and healing for people suffering with anxiety. To make a real difference a conscious and concerted effort will need to be made by yoga teachers and community organisations to raise awareness of yoga and its powerful benefits for people suffering from anxiety.